This post may contain affiliate links. This means Bailey’s Puzzles might receive a commission on the sale of certain items. This is at NO additional cost to you. Visit the policies page to learn more.

When you first learn How to Play Sudoku, you learn some basic techniques to use such as by row, column, square, etc., But eventually, you’ll move on to harder puzzles that require more advanced techniques to solve.

There are 2 intermediate sudoku techiques and 5 advanced sudoku techniques that are really useful to learn:

A couple of notes:

Intermediate sudoku techniques are useful for some medium-level puzzles but will mostly be used for hard puzzles. Check out these two strategies!

Subsets are pairs or groups of numbers that occur in multiple blocks. These numbers can then be eliminated from other blocks in the row/column/square.

Subsets are cells with the exact same potential numbers. For example, you might have a subset pair which would be the same two potential numbers in two different blocks. Subsets can be naked (clear to see) or hidden (there are other numbers in the block that don’t need to be there). 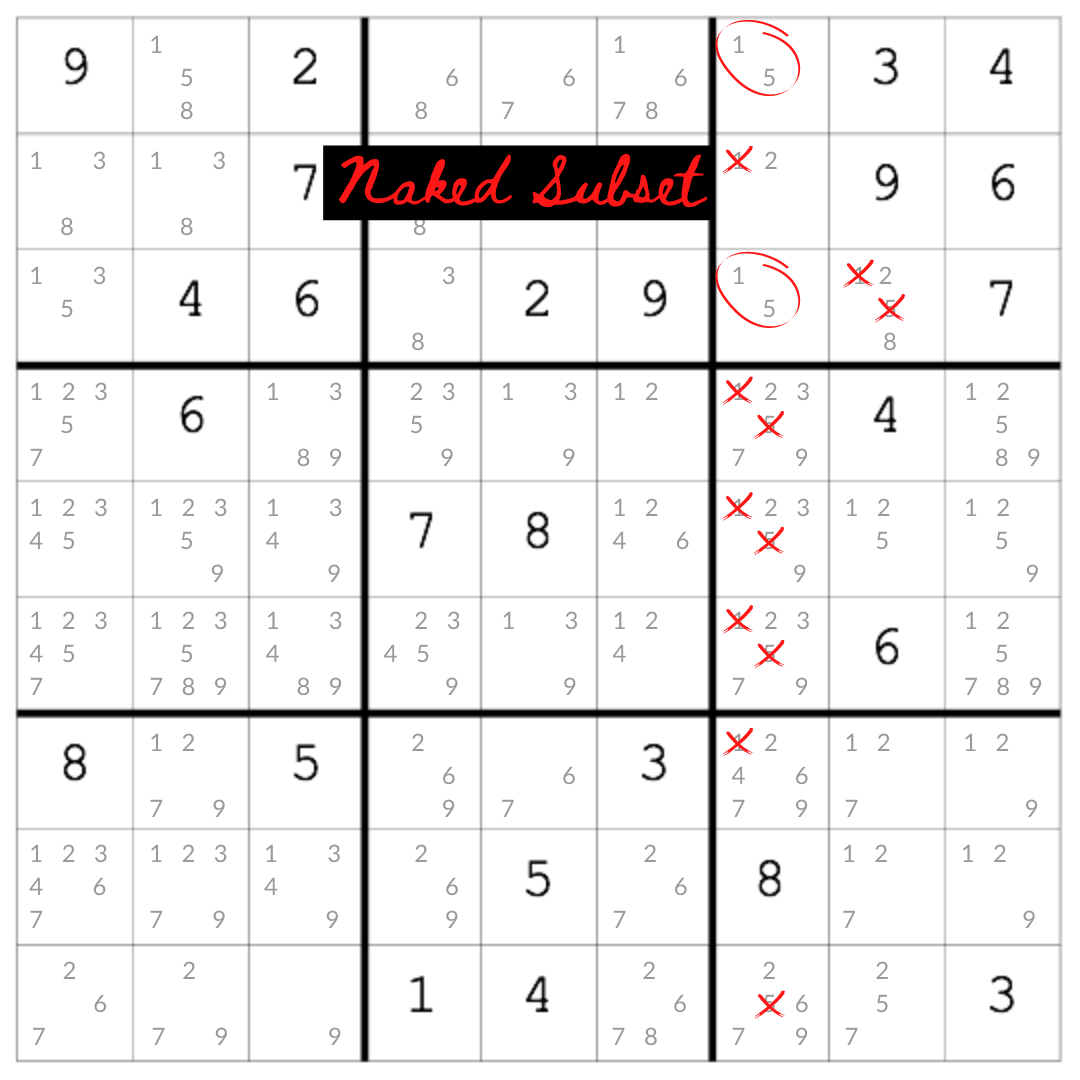 This is a naked subset. We call it naked because it’s right out there in the open, totally obvious, and easy to spot.

In the example, you can see I’ve circled a 1 & 5 in two different blocks. Since the 1 and 5 are going to be in those two blocks, we can then cross them out in the other blocks (in this case, we can cross out all the 1s and 5s in the same square and the same column). 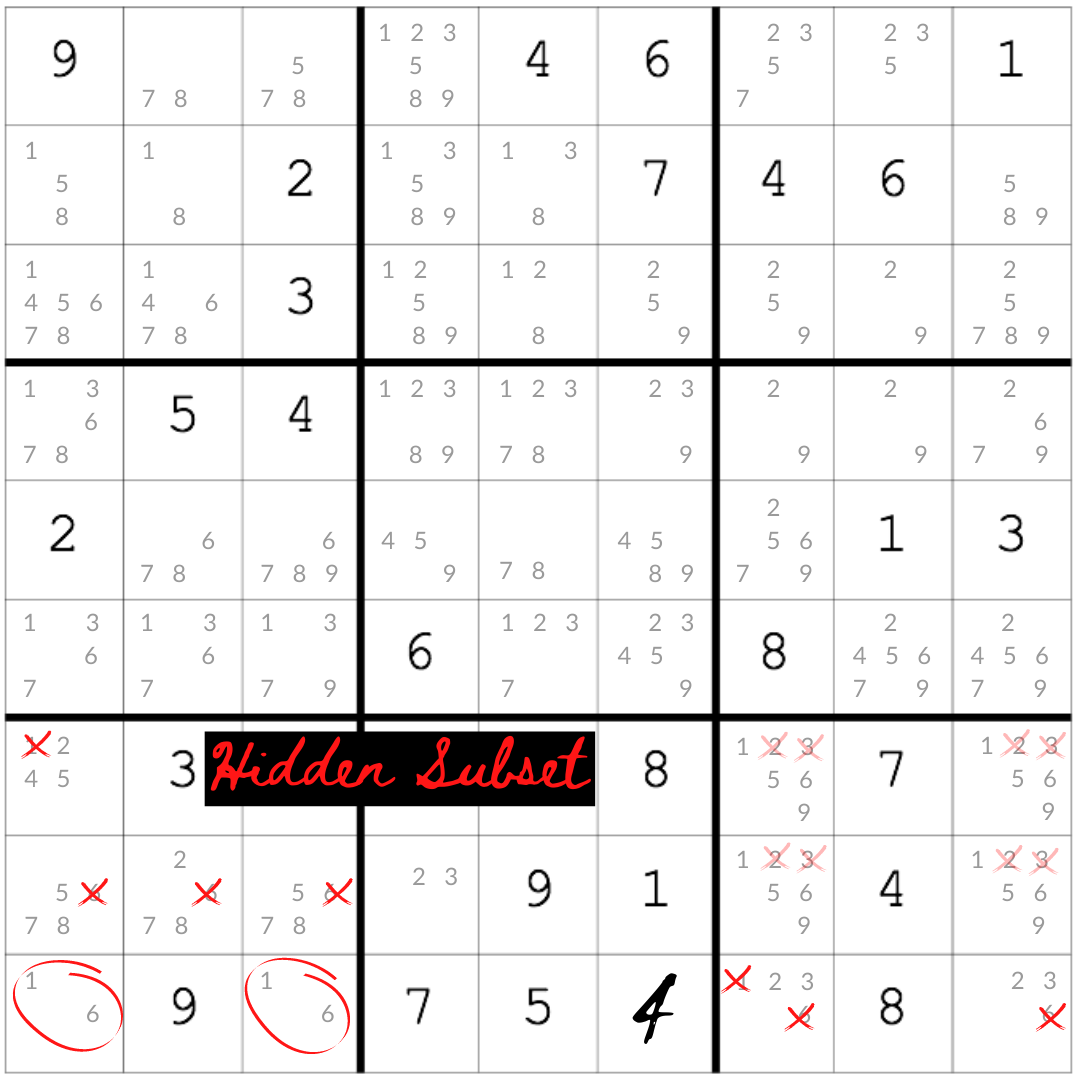 This is a hidden subset. We call it hidden because it’s NOT right out there in the open, totally obvious, or easy to spot. Hidden subsets are harder to see because they’re hidden amongst additional numbers but they operate the same way as naked subsets.

In the example, I’ve circled two blocks containing a naked subset (1 and 6). The next step is to check the remaining blocks in the square and row.

This is a useful strategy because we can now remove 2 and 3 as potential numbers in the rest of that square.

This example of a hidden subset was fairly obvious but sometimes they’re much more hidden and will become more visible when you start practicing the advanced techniques that are coming up.

Blocking is similar to the subsets technique but applicable to single numbers. When a number exists for a row (or column) only within one square, you can remove that number from the remaining blocks in the square.

What do I mean by that? 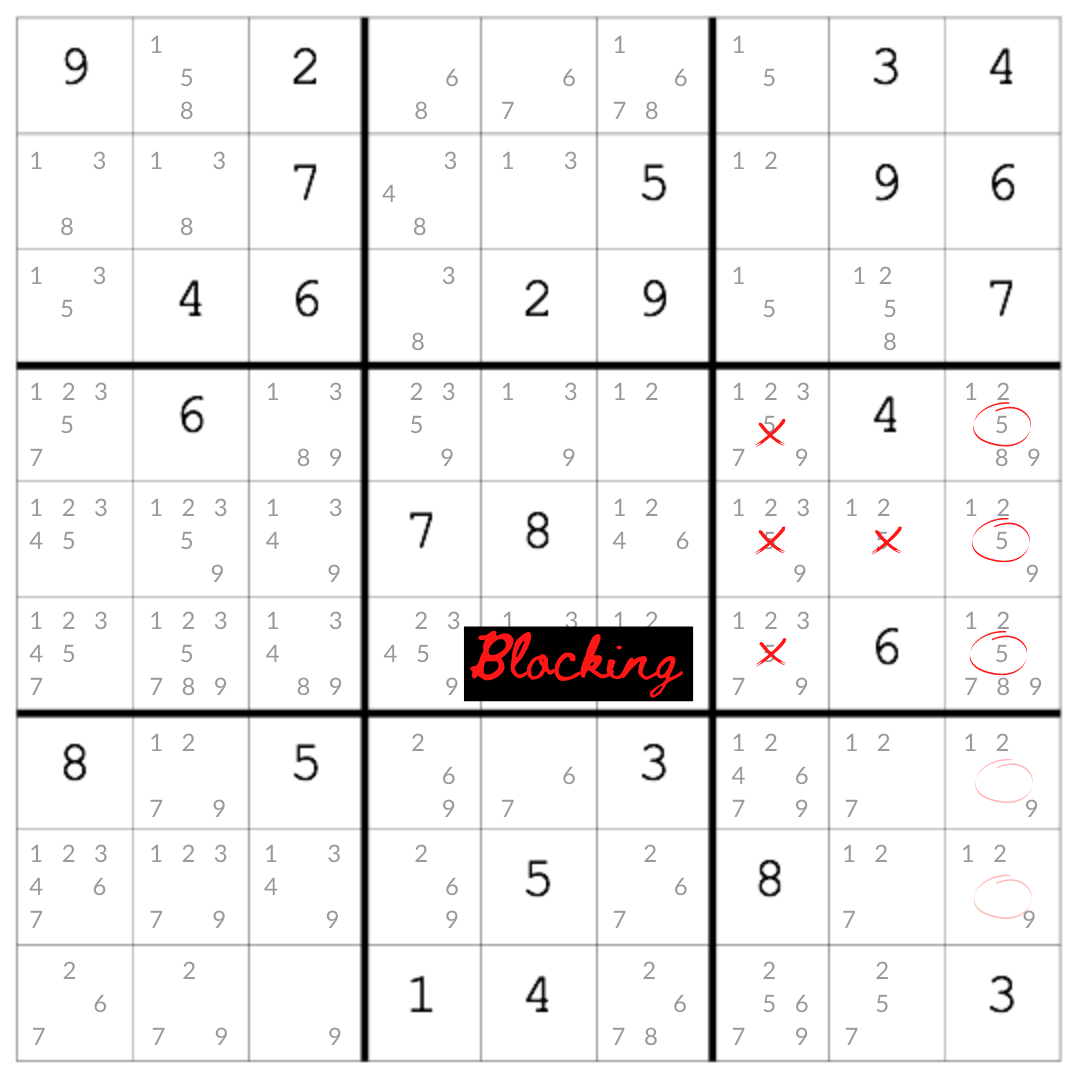 If we look at the far right column, you’ll see I’ve circled all the potential 5s. They’re all within one square (the middle one).

This means, we can remove the potential 5s from all the remaining blocks in that square (because we know the 5 in that square has to be in the far right column).

Join the Puzzle Club and receive free sudoku puzzles as part of your daily printable puzzle. Plus, when you’re in the club you’ll stay up to date with Bailey’s Puzzles!

The basic and intermediate techniques and strategies you’re already using will allow you to complete many sudoku puzzles. But sometimes you’ll need something more advanced like these 5 advanced sudoku techniques.

The X-Wing strategy is about reducing potential numbers. It’s all about rows and columns. Squares are ignored in this technique.

Once you’ve identified your pattern, it should be clear that the number must exist only once in each row and column, so you can remove as a potential number from all other blocks in those rows and columns.

Let’s take a look to see what I mean. 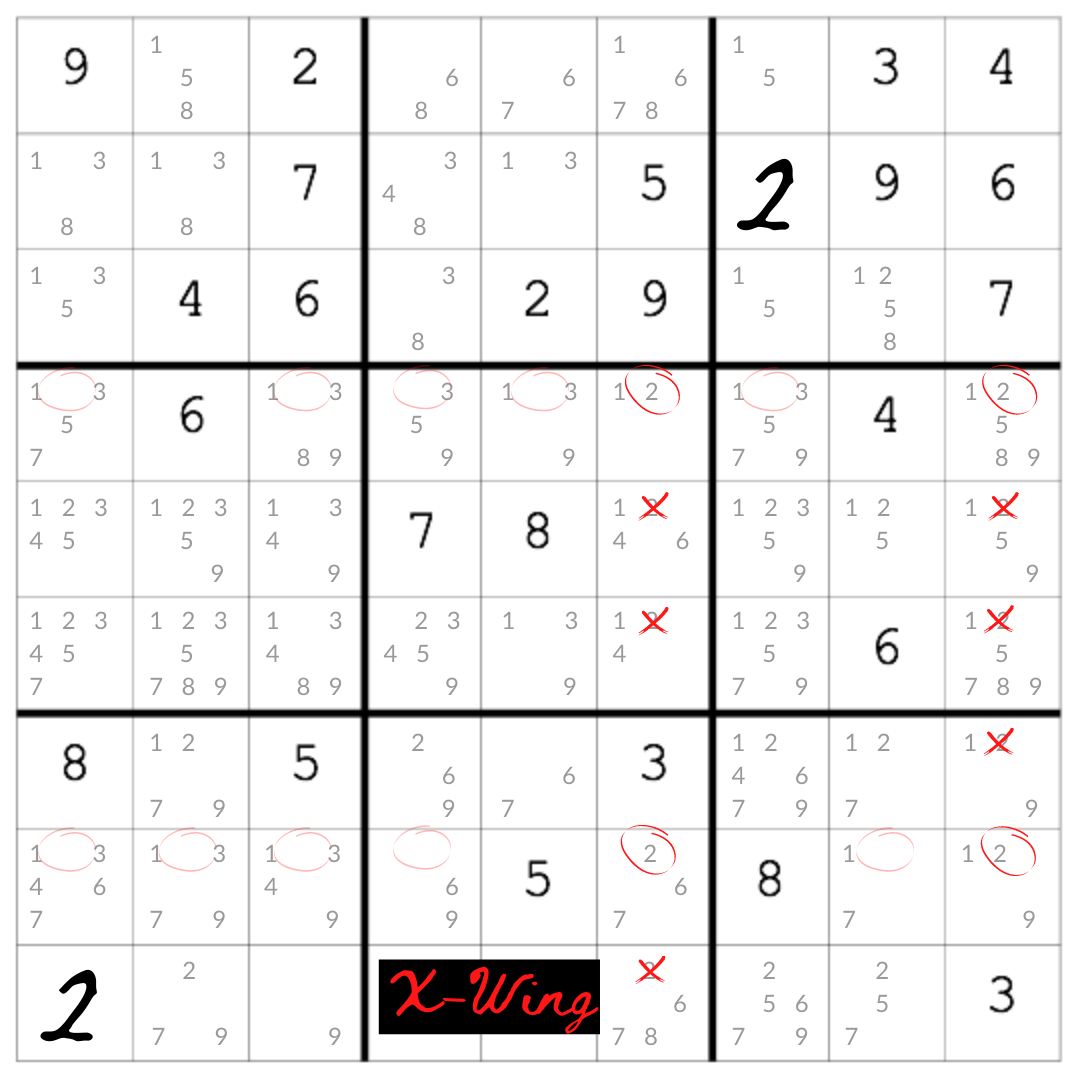 If we look at the 4th and 8th rows, we’ll find the number two occurs twice in each row (in the same columns).

So we can cross out any other 2s in the those columns (we got to cross out 6 potential twos in the example).

The Swordfish Technique gets its name from what it can look like. Sometimes (but not always, or even often in my experience) the swordfish technique will create a pattern that will actually resemble a swordfish.

The swordfish can be a really useful technique but it can also be really hard to find. Like the X-Wing Strategy, the Swordfish is about reducing potential numbers. The X-Wing Technique looks at two rows, the swordfish technique goes bigger and looks at three rows.

Alternate method: The first part is the same, start by looking for a number that appears twice in a single row, three times, with the number also appearing in the same 3 columns. Now instead of imaging lines running through the rows and columns, image lines connecting the 6 numbers in a closed-loop. You can then remove the potential number from the same rows/columns that are not part of the loop. 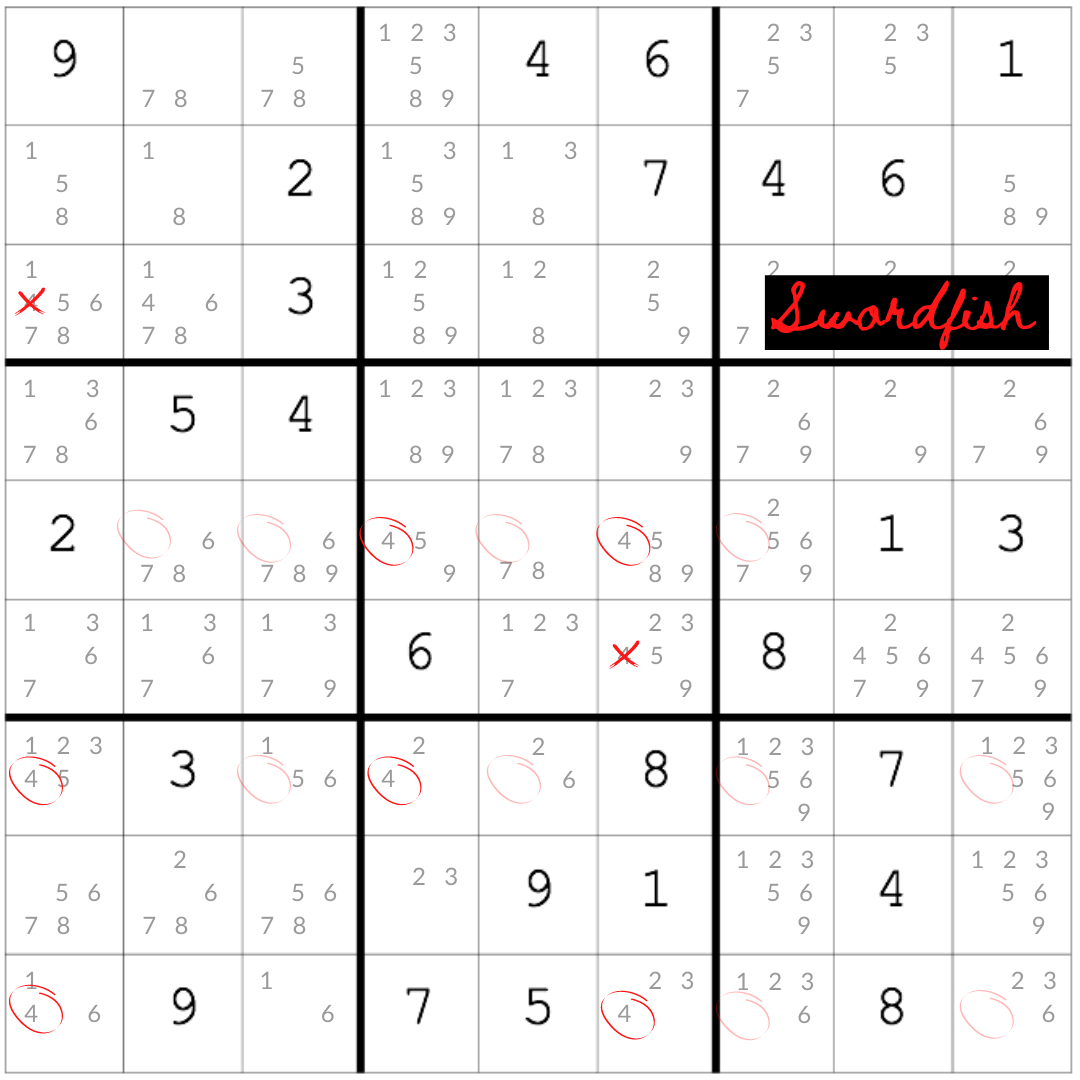 So we can cross out any other 4s in those columns (we got to cross out two in the example).

And that is how the swordfish works.

You can also do the swordfish by columns instead of rows (look for a number that appears twice in a single column, three times, with the number also appearing in the same 3 rows).

The XY-Wing technique is a strategy to remove potential numbers (just like the X-Wing and Swordfish strategies).

The XY-Wing strategy requires 3 blocks with a pair of numbers that are semi-shared between all three blocks. Sounds strange? Yeah, it is. If your pairs are AB, BC, and CA the middle block will have one number from each of the other two pairs.

Once you’ve found your three blocks, you can connect them with a single line. This is where the XY-Wing get’s it’s Y from because the line will typically resemble the top of a Y (so really, a V, but I didn’t name it).

Now you get to use some logic to see which rows, columns, and squares potential numbers can be removed from. Rather than give you a (more) complicated explanation, let’s take a look at an example. 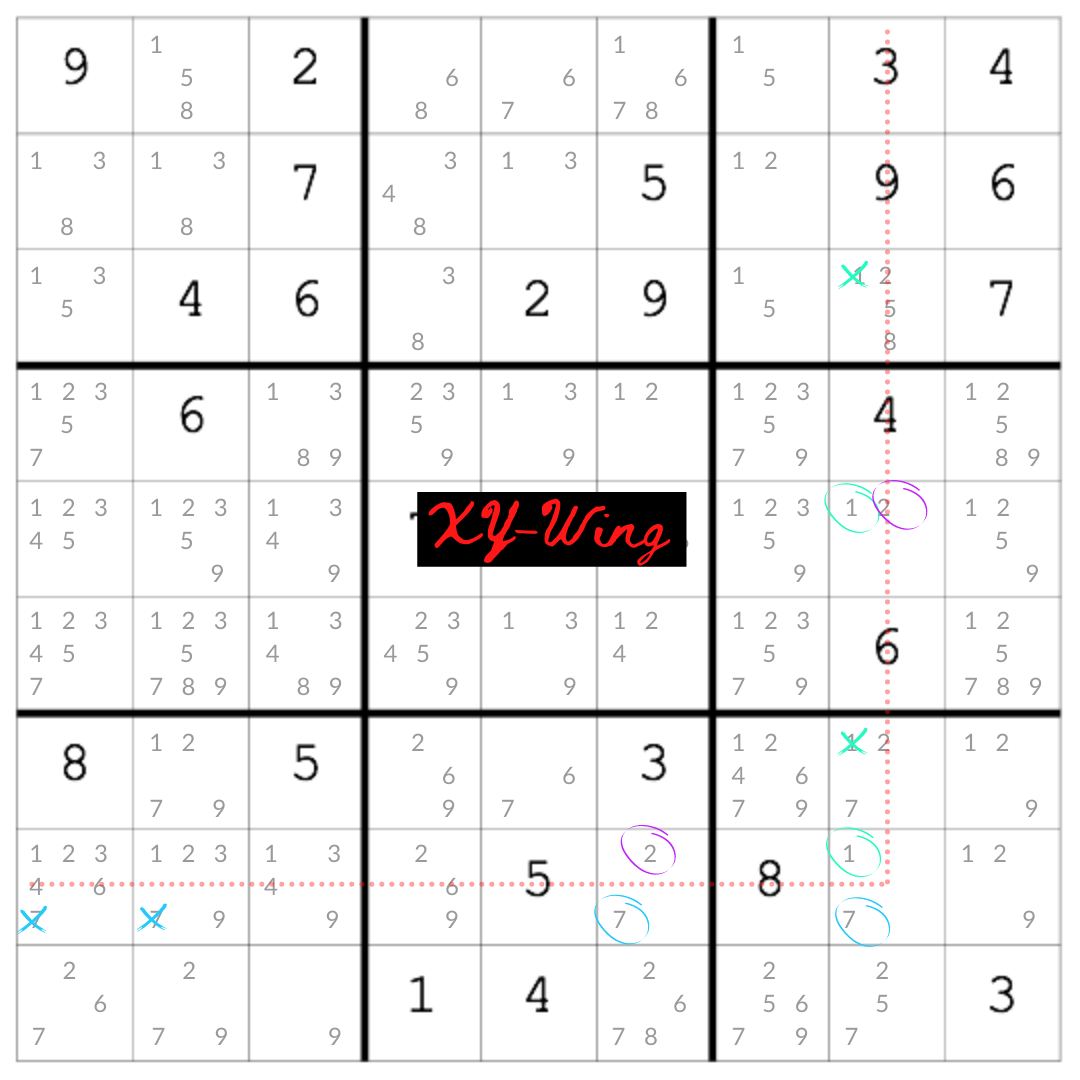 Our row must have a 7 in one of the original blocks, so we can remove any potential 7s elsewhere in the row (I’ve crossed out 2 in the example).

Our column must have a 1 in one of the original blocks, so we can remove any potential 1s elsewhere in the column (I’ve crossed out 2 in the example).

And that is how the XY-Wing works.

The Unique Rectangle technique involves a rectangular pattern in two squares where three of the corner blocks have the same pair of numbers. The 2 numbers from those pairs can be removed from the forth corner block.

This is actually a really easy advanced technique and once you start noticing it, you’ll begin looking for it more automatically. Let’s check out an example. 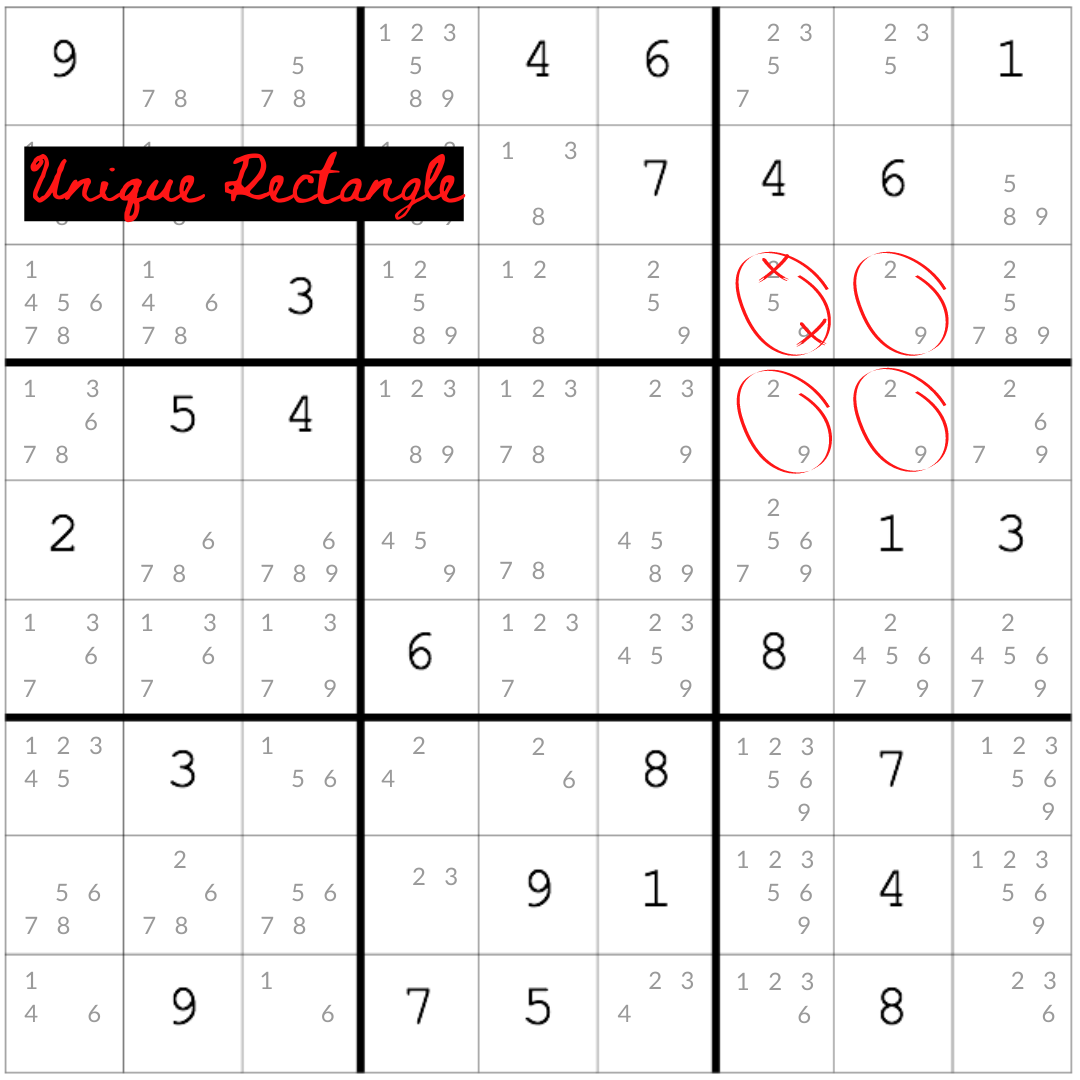 This meets all the requirements:

This means I can cross out the pair numbers from the forth corner square.

Forcing chains is the last technique on this list for a reason. While this is one of the easiest techniques to understand, it’s one of the most complicated and uncertain to execute. Chains can be very long and they don’t always result in a solution.

Forcing chains is an experiment. It requires at least two blocks with only 2 potential numbers each (can be different or the same). You choose one of the cells and choose one of the numbers and work through to see if it works and results in a solution for the other block.

Let’s take a look at a couple of examples (one that works out, and one that does not). 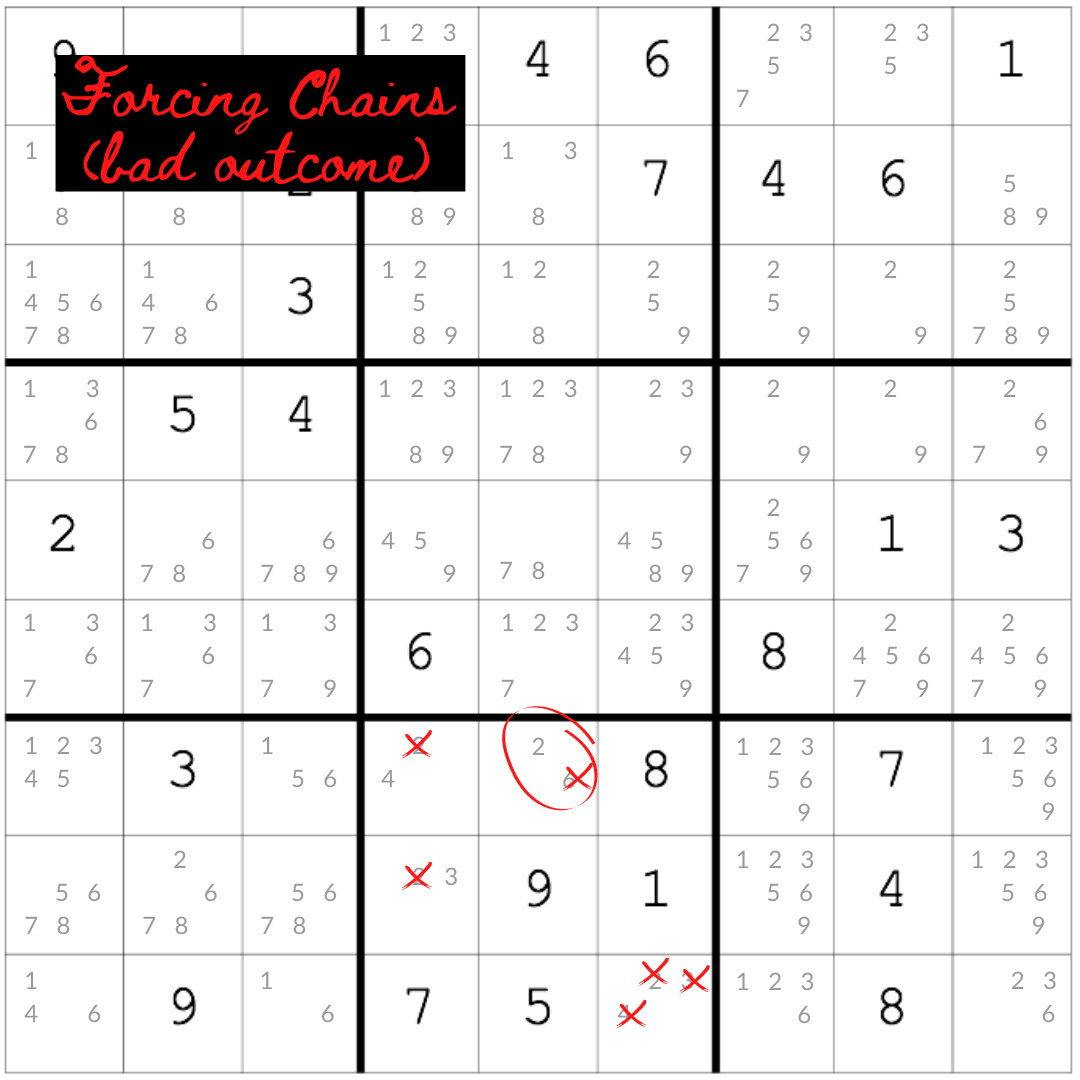 This example is of a forcing chain that didn’t work out.

In the bottom middle square, I chose the 2 from the top-middle block (the only potential numbers were 2 or 6). This meant that I could cross out the 2s in the rest of the square. Once the 2s were all crossed out, I only had a 4 in the top-left and a 3 in the middle-left. BUT, this left we with no potential numbers left for the bottom-right block. 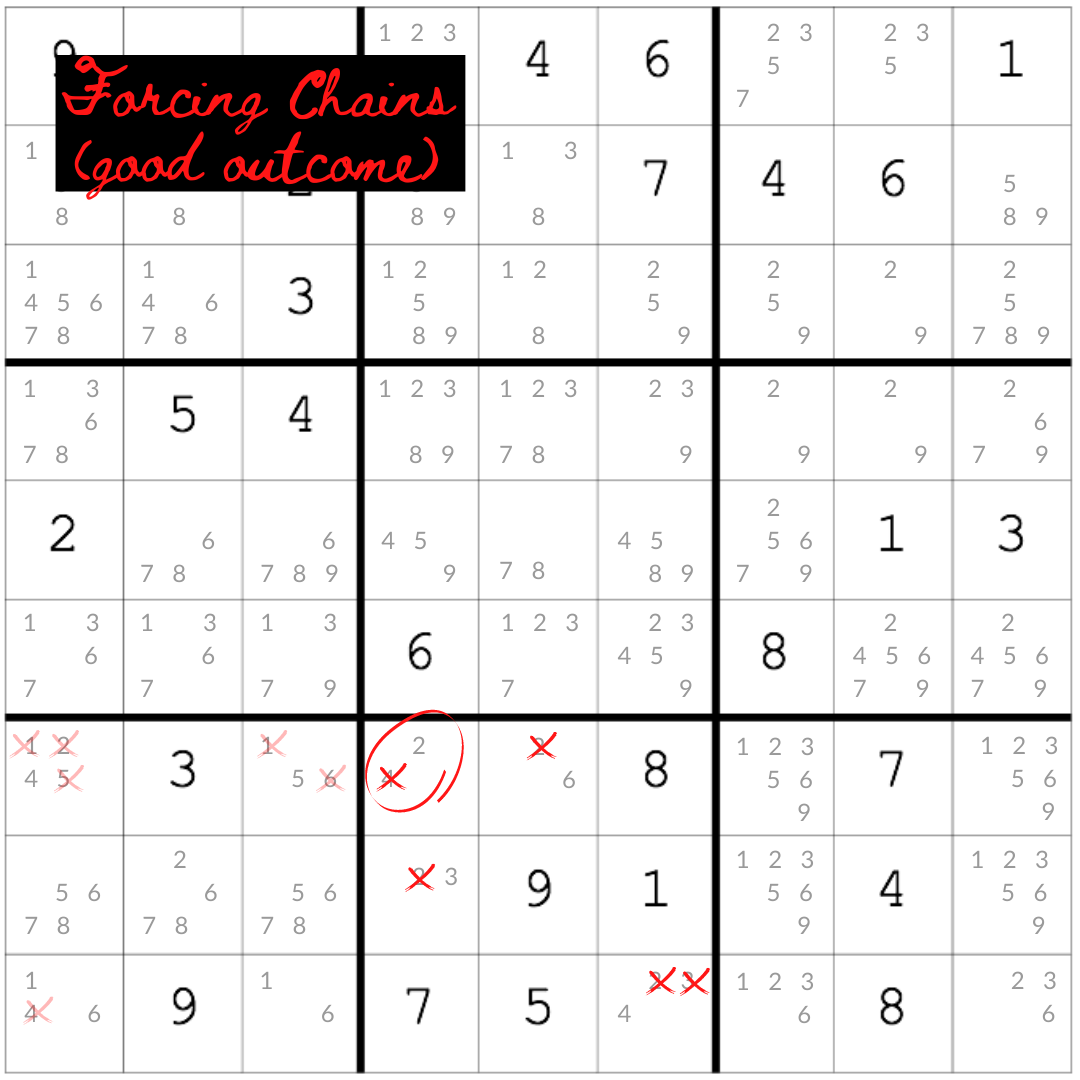 Pretend like we didn’t already do the last one because I’m using the same square as an example here.

This time, I’ve chosen to use the 2 in the top-left block of the bottom-middle square. That means I can cross out all the other two’s in the square and row. This leaves me with only a 6 in the top-middle and 3 in the left-middle. Once I fill out those, I then only have the 4 left as a potential number in the bottom-right.

I’m going to stop my example here but this chain has opened up a lot more options for solving the puzzle (check out some of the light-red X’s I made in the bottom-left square).

The forcing chains examples above are very clear and fairly short but that’s not always the case. Often a forced chain will get long and messy which is why it’s a last resort type sudoku technique.

Join my Puzzler Club and stay up to date with Bailey’s Puzzles plus get a free printable puzzle every day!

You Can Master Sudoku!

Join my Puzzler Club and stay up to date with Bailey’s Puzzles plus get a free printable puzzle every day!

Welcome to the club. Please check your email!